Designer Marguerite Humeau reconstructs the voices of extinct animals based on speculative extrapolations from their skull structure.

As she described her work in an interview with We Make Money Not Art last month, the project is an attempt “to resuscitate the sound of prehistoric creatures by reconstructing their vocal tracts,” casting large resonation chambers that then whistle, bleat, bellow, and moan, offering fictionalized bodily soundtracks for multi-million year-old landscapes.

Appropriately called The Opera of Prehistoric Creatures, it includes sonic reconstructions of three species of extinct mega-fauna, including the Ambulocetus, or “Walking Whale,” an Entelodont, or the terrifying-sounding “Terminator Pig,” and a Mammoth Imperator. 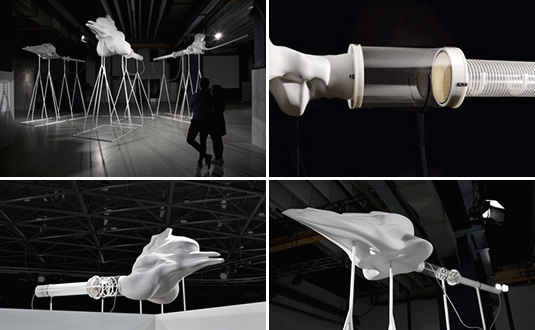 Partial reconstructions of their skeletons, combined with the speculative sounds of their long-lost calls, form what Humeau calls “semi-real, synthetic ruins.” They stand like bleached monuments in the gallery space: resurrected animal bodies singing dead songs for the 21st century.

Briefly, and unrelatedly, I’m reminded of the extraordinary point made in Adrienne Mayor’s fantastic book The First Fossil Hunters, where we read that one of the reasons for ancient myths of cyclops, giants, and titans was, in effect, bad paleontology. In other words, the ancient Greeks and other civilizations around the Mediterranean simply got their fossils wrong, reconstructing old bones not as the mammoths they really were—

[Image: From The First Fossil Hunters by Adrienne Mayor].

—but as truly massive, humanoid forms with odd, singular holes in the middles of their skulls (actually a nostril, not a cyclops eye), lording over tiny humans who quaked miserably beside them. 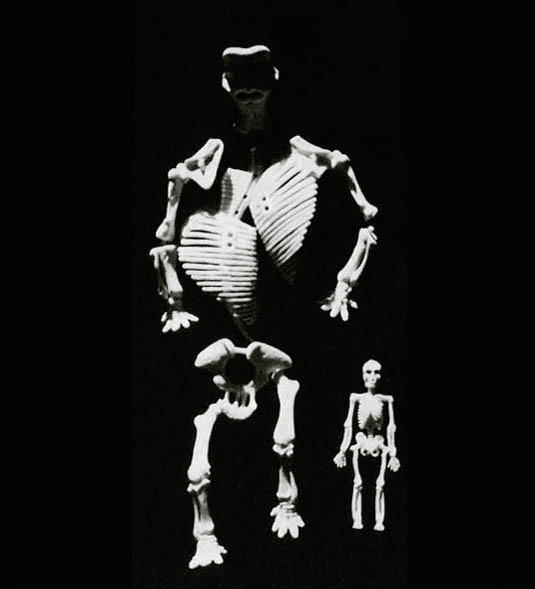 [Image: From The First Fossil Hunters by Adrienne Mayor].

In any case, you can listen to Marguerite Humeau’s soundscape of extinct animal calls here. http://bldgblog.blogspot.com/2013/05/the-extinction-orchestra.html